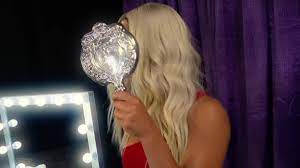 The identity of the mysterious woman on WWE SmackDown has already been revealed.

As was noted earlier, a mysterious person wearing black appeared at the end of the Women’s Tag Team Title match that featured Damage CTRL against Liv Morgan and Tegan Nox.

The mystery person attacked Nox and caused her team to lose the match. It was later revealed in a WWE digital exclusive that the mystery person is Xia Li. As seen below, Adam Pearce told her to go into her office, so repercussions may be coming.