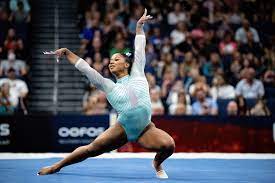 The 2020 Olympic medallist and world team champion on dealing with social media, Paris 2024 and the upcoming season at UCLA

Olympic silver medallist Jordan Chiles, who recently helped the U.S. women’s artistic gymnastics team to a record-setting sixth-straight world title, is determined not to let social media negativity get her down.

“Honestly, you know what, people can doubt, people can hate. People can say whatever they want, but that doesn’t determine what we’re going to do in ourselves,” Chiles told Olympics.com in an exclusive interview after the World Championships in Liverpool, UK.

“You guys can keep doubting no matter what, it’s not going to change who we are. It doesn’t identify us.”

Like so many athletes, the 21-year-old gymnast has had to deal with more than her fair share of what she calls ‘bully bots’ online.

Chiles added, “I do see comments. I do read them. I know a lot of people probably have tweeted me, like, ‘Oh my gosh, Jordan doesn’t read my tweet,’ and this, that and the other. Yes, I do read your tweet, but that doesn’t mean I’m going to respond to you. That doesn’t mean you’re going to get under my skin.”

Instead, Chiles says, she tries her best to use it as fuel for her goals.

“It just means that you’re making me stronger as a person so I can prove to you that your tweet is wrong. I don’t want your negative energy coming into my positive vibes that I’m trying to give to the team and to myself.”

Chiles is also trying to give herself a shot at redemption at Paris 2024.

Though she remains steadfastly proud of the team silver medal she and her U.S. teammates collected at Tokyo 2020, a disappointing performance during the qualifying round sparked a desire in her to continue elite gymnastics.

“Paris, for me, it’s like… I’ve had my eye on it since qualifications at the Olympics,” she told Olympics.com in March. “Obviously, you guys saw I didn’t have the best meet of my life. The reason why Paris came up is because I barely hit my peak. And I knew that at that point I was like, ‘OK, so if this is me, not really at my peak, what can I do more?’’”

Her recent success at the World Championships, which included silvers on vault and floor, in addition to team gold, show just how much more is possible for Chiles.

And she achieved it all after one of the busiest stretches of her career.

She went from a breakout win at the 2021 Winter Cup, which suddenly marked her out as a top contender for the U.S. Olympic team, to the Olympic selection process to the Games themselves.

After getting home, she quickly joined Simone Biles’ ‘Gold Over America Tour,’ an arena show that crisscrossed the U.S. and visited more than 30 cities.

From there, it was off to Los Angeles where she competed through April 2022 as part of the University of California at Los Angeles (UCLA) women’s gymnastics team.

She, again, had little time to rest before beginning to prepare August’s U.S. Championships, the first step toward making the U.S. squad for the worlds.

It felt like history was against Chiles who had missed out on the U.S. teams for the global event on three previous occasions (2017, 2018 and 2019).

“Like I’ve said a lot of times, fourth time’s the charm for me,” Chiles said with a smile in Liverpool.